Mr. Hyde is a recognized pre-workout supplement in the supplement industry. It is mainly known for its strong intensity when contributing to sessions in the gym.

Mr. Hyde is a pre-workout supplement from the Prosupps brand. Pre-workout boosters are supplements that you take before your workout to boost energy. You may need this if you have an extra heavy training on the schedule, or if you feel little energetic before you start training.

The most important substance in pre-workouts is often the caffeine. Mr. Hyde contains per dose, a scoop of 7.1 grams, 400 mg caffeine, in different bindings. This is a lot; about 2-3 times as much as in most pre-workouts. Mr. Hyde will wake you up well.

Instead of paying attention to marketing, in this review we focus on the facts behind Mr. Hyde, what it contains and how good it will actually be for your training. 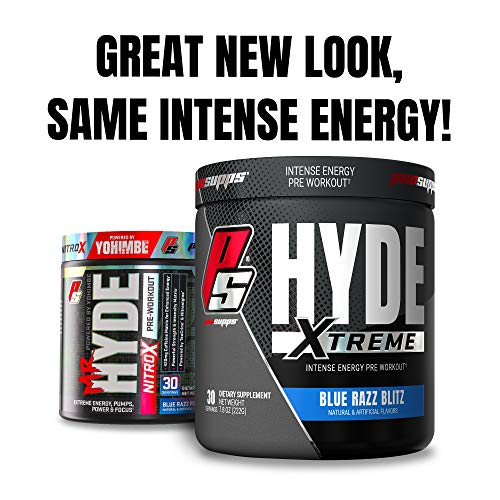 This is what you need to know:

About the company: Pro Supps

ProSupps has been in the market for years, it is a very well established brand. It provides a large number of supplements to the industry, its biggest export is its variety of pre-workout supplements. Its ingredients are of high quality. Whether they have chosen or not, however, is something else.

The ingredients and how they work

In the case of Mr. Hyde, all you need is a spoonful 15-30 minutes before training. That is all. We have fixed the doses in this product and the caffeine is very high. This is not a pre-workout supplement that you want to ingest in a double spoonful.

In the case of Mr. Hyde, we recommend that you use it as indicated or even in smaller doses if you are sensitive to caffeine.

Mr. Hyde USA is the original version of the Pre-workout supplement that has upset the insiders.

From the research team of Pro Supps, a famous US brand that produces only “hardcore” blends for those who train intensely, this product was born; a formula of active ingredients of absolute quality, such as the innovative ingredient Agmatina Sulfate, or Leucine, which together with other compounds encourage our body to support workouts above all limits, maximizing muscle growth and sports performance.

Everyone knows that when you train intensely it is very easy to stagnate in stalemates, so then products like Mr. Hyde USA can help the agonist, or at least those who train intensely, to bypass this phase and achieve the desired results.

This innovative formula, the subject of numerous studies by Pro Supps researchers, is aimed at promoting:

The formula of Pro Supps Mr. Hyde USA is aimed at the triple action of its 3 blends, called Strength Matrix, Caffeine Matrix and Intensity Matrix.

The blend based on caffeine includes the anhydrous form, the diseased dicaffein and citrate. This plant extract is a powerful stimulant of the snc, and is able to accelerate the metabolism, promoting lipolysis, increasing energy levels, increasing focus and concentration.

Another particular ingredient of Mr. Hyde USA is the Carnosyn, or the patent of the beta-beta alanine, amino acid precursor of carnosine.

It is fundamental in increasing energy levels, through the production of ATP, and exerts a stimulating action of the levels of force; it also improves the contractile power of the muscle fibers, preventing the excessive secretion of lactic acid, which creates a feeling of stiffness and musculoskeletal pain.

Recent research shows that L-Leucine is involved in the stimulation of growth hormone, and is still considered the most powerful branched amino acid for protection against muscle damage.

Nutristock recalls that this commercialized version is the original USA formula, directly produced and marketed by Pro Supps, which includes powerful “hardcore” ingredients.

Numerous studies have been carried out on this plant, and all indicate how it can increase the caloric expenditure, and consequently the availability of energy, increasing the resistance to fatigue. It is still used today as a powerful aphrodisiac, as it produces increased libido and the production of testosterone, a hormone that gives strength and sexual force.

The innovative ingredient of Mr. Hyde USA, however, is Agmatine Sulfate, the most important discovery in the field of food integration, since the time of creatine monohydrate. This principle is a derivative of the synthesis of L-Arginine, and has shown marked effects on vasodilation, increasing the oxygen supply to tissues, through a greater blood flow. According to some research it would also stimulate protein synthesis.

Ultimately, we can summarize the main features of Mr. Hyde USA saying that:

It is a powerful supplement. This is all you need to know about the ingredients:

2). Creatine nitrate: It is fantastic to boost the production of energy at a general level.
Creatine accumulates more water in your muscles that allows them to reach a more explosive energy.

3). Agmatine sulfate: It may have some effect on cognitive performance but not much evidence has been presented about it.

However, studies have shown that you need at least 4-8 g of Citrulline to achieve the effects in full. The 500 mg of Mr. Hyde will not be of much help.

5). Caffeine matrix: Potency is the best stimulant on the market but there is a trap in Mr. Hyde. The caffeine matrix is high. With a total amount of 419 mg of caffeine, it is difficult to generate tolerance in a single shot at that level and could cause several side effects. We will address this aspect in depth later.

Intensity matrix
6). Choline Bitartrate: It is a cognitive enhancer that in your body is transformed into acetylcholine, the nutrient that stimulates learning.

With the right dose, this nutrient can increase your overall concentration in the gym.

7). Hordenina: Also known as N, N-dimethyl-tyramine, it is found in several foods and is thought to work as a fat burner. However, it may not be the case. There is little evidence in this regard, so it is necessary to carry out more studies to confirm the suspicions.

8). N-methyl l-tyramine HCl: Have a structure similar to the hordenina and with similar results. It is a fat burner, but without confirmation about it.

9). GABA: It is mainly used to stimulate concentration due to how it increases the “depressive” neurotransmitters without causing vertigo. However, studies have shown that it is difficult for him to cross the blood-brain barrier and may sometimes be unreliable.

10). Yohimbina: It is most commonly used in fat burners and is thought to suppress appetite, however there is a link.

11). Root of Rauwolfia Vomitoria: With an effect similar to Yohimbine, it could suppress appetite, but as a pre-workout supplement you will not get many benefits.

This is what you need to know about the ingredients:

Generally speaking, there is a combination of certain pre-workout supplement ingredients that are fantastic but there are also one or two that are not as good.

The main thing that we advise you with a nutritional profile like this is to start with small intakes. Caffeine will cause a powerful effect. Start with a low dose and increase until you reach a spoonful. This way you will avoid any unpleasant surprises.

Side effects
There are two problems we want to address about the side effects: caffeine and yohimbine.

If you are consuming almost 500 mg of caffeine per dose; that’s more than 5 cups of coffee, all at once. It is a serious matter.

On the other hand, it was reported that yohimbine causes anxiety, hypertension and gastrointestinal discomfort.
It is a risky choice but the other ingredients are solid.

The nutritional profile is good. You should be able to get a good amount of energy and concentration with Mr. Hyde. However, again, it could be too much caffeine to tolerate. Do not be tempted to eat a double spoonful. It is not the best pre-workout supplement available but it is definitely among the best.

Get your FREE Fitness Programs Guide

0shares
Special offer for our visitors

Get your Fitness Programs Free Guide

We will never send you spam. By signing up for this you agree with our privacy policy and to receive regular updates via email in regards to industry news and promotions