How to Do the Shoulder Press Vs. Military Press Workout Today

Home Fitness How to Do the Shoulder Press Vs. Military Press Workout Today
by

Shoulder press is one of the most important basic exercises and forms the optical basis for a broad appearance. A broad cross and strong, round shoulder heads make a body look agile and impressive.

Since the shoulder joint is a relatively complicated construct consisting of a so-called rotator cuff and three heads of the delta muscle, there are several exercises to bring this area of the body up to date.

However, most of the exercises should be included rather supportive in the training program to compensate for muscular imbalances, to serve the health of the joint or to tickle out the final visual touch. But shoulder press is a must-have for a well-balanced development of the deltoid muscle.

Here, heavy, heavy loads are carried not only by the front head of the delta, but also by the lateral part of the shoulders and by some synergists such as the triceps.

At this point, however, we want to clean up with a rumor that is extremely persistent: no form of shoulder pushing trained the back of the shoulder; the one categorically excludes the other.

Today we look at the following variations of shoulder press and will go through the technique step by step:

Shoulder press in front of the head – front press

Shoulder presses before the head (also called front press) is the safest and most uncomplicated variant of this exercise. Here only the barbell or the bar is left in front of the face and not behind the head down.

In this position, the shoulder joint is much more stable, and a little more weight can be moved overall. For safety reasons, if you are in doubt, pressing the front of the machine is preferable to other types of shoulder pushing.

Of course, exchanging the exercises from time to time is not wrong, but priority should always be given to front press.

The standing shoulder press (also called military press) is an exercise that is almost identical to the front press to the last detail: The exercise is done standing, not sitting down.

This result in some challenges for the trainees: Multipress cannot be used! Free weights or a commercial barbell are the means of choice. The fact that the back is supported by no Multibank, the risk of injury to the back is greater.

If you have stability problems in the back muscles, you better avoid this exercise! Even for beginners shoulder presses while standing unsuitable because the coordinative conditions are not yet given. 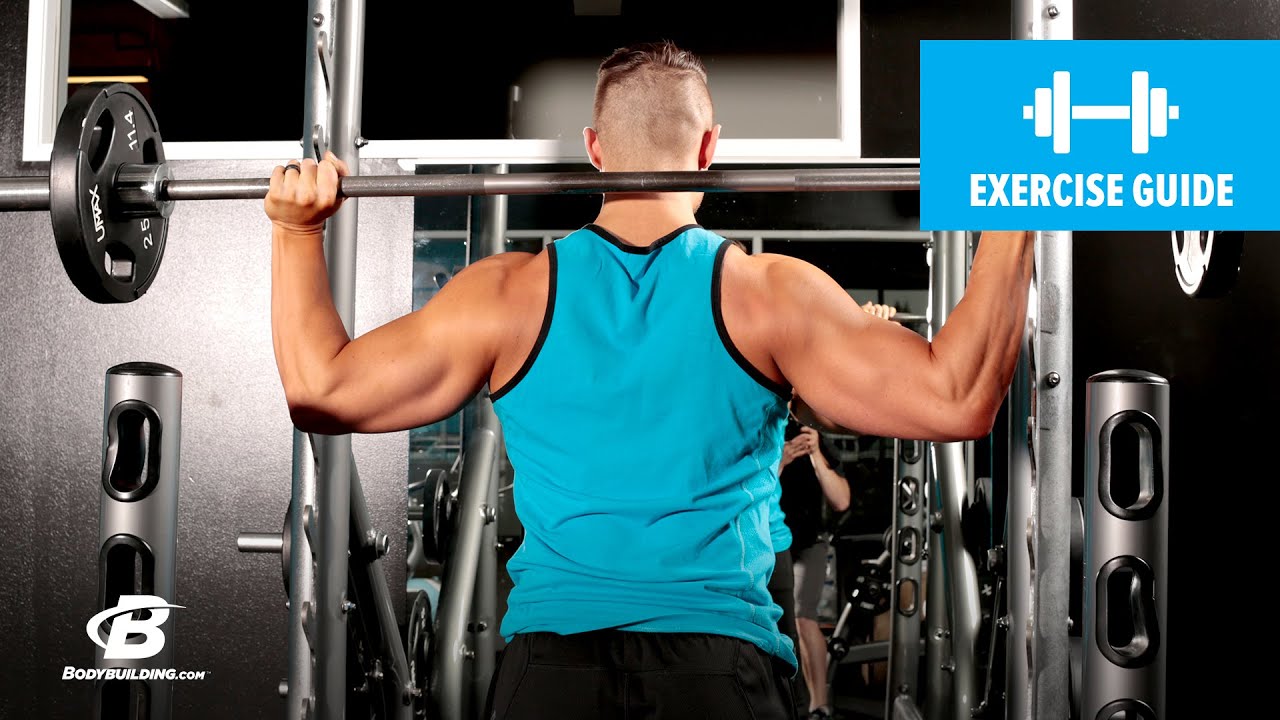 Pushing the shoulder behind the head (also called nape pressing) is a very old version of the push of the shoulder, which already has its most popular times long behind. The procedure is very similar to that of the front pushing, but here the rod is lowered not in front of the face, but behind the head.

The problem: When pressing the shoulder behind the head, the shoulder joint is at the lowest point in a very unnatural and weak position. The risk of injury is much higher!

Effectively, this version of the shoulder pushing differs only marginally from the front press, only the lateral delta head gets a little more of the load.

Shoulder press with the dumbbell

Shoulder press with the dumbbell is probably the most gentle way of shoulder pushing and at the same time very effective to stimulate both the front and the side delta head.

The only drawback to the exercise is the implementation of dumbbells. If these are not dumbbells with ball bearings, i.e. if the handles are rigid and cannot be turned, this may strain the wrists.

Furthermore, it is almost impossible with appropriate weight, the dumbbells to move on their own in the starting position. Help is provided by the training partner, who gives you at least one dumbbell.

No matter which form of shoulder pushing you decide on, always remember to progressively increase weights, train safely and neatly, and always consume enough calories and protein. The reward after a few years of hard training is broad shoulders and a great V-shape!

How to increase the effectiveness of the exercise

Optimal kickback effect gives the army’s performance total amplitude benching, that is, the movement of the “swing” comes from the chest at the lowest point of the full hand extension with the projectile at the top.

How to adjust the focus of the load

A bar foot with a chest can be made in two technical variations: from the chest or from behind the head. The difference in kinesiology allows you to load the muscle that works from different angles. In particular, the load in the vertical press focuses on the front and middle beams of deltas, with emphasis on the first.

Performing press from behind the head reduces the range of movement and allows greater use of the rear head. It is worth noting that the position of the forearms military press in this case is less physiological, which significantly limits the work with the weight.

However, by combining these two types of movements, you can achieve a harmonious deltoid proportionality.

In the first variant, the athlete is in the starting position with slightly bent legs in a small step position and keeps the dumbbells at shoulder level.

The lowest position is also the starting position of the movement; the dumbbell touches the shoulders or almost approaches. The use of a backrest in the second variant is a matter of taste, as well as the exact setting when using this.

Muscles involved in this training

Shoulder presses can be executed in a variety of variations.

Shoulder press with barbell or dumbbell?

The advantages of shoulder pressing with barbell are, for example:

The advantages of shoulder pressing with dumbbell include:

So much for the basic exercise of shoulder pressing. In the next article on basic practice we discuss the last of the 5 basic exercises, the pull-up.

Have fun and success in training!